Desperate to get back to his own time, Serling builds a makeshift Time Window for himself. But when he’s zapped to the NYC sewers to Turtle Tot time it’s his worst nightmare as they tap him as their favorite new toy and he must clandestinely work to save the mischievous foursome as they get into all sorts of trouble!
Концепты к серии: 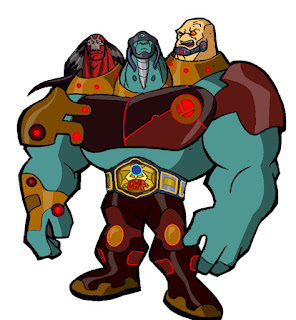 "WENDELL'S POV ON SERLING: Serling, still six-inches tall, walks along the sidewalk, hand to head, disoriented. The Toy Soldier, the same size as Serling, draws near...

CU ON SERLING: collecting his bearings...

SERLING'S POV: The Toy Soldier, looking MASSIVE, is heading straight for him, banging its drum, seemingly on the attack!

While this works okay as is, I wonder if it might be more visually interesting and serve as a way to show WHY Serling has such a great appeal to the toy collector Wendell if, instead of screaming and running away, Serling defends himself against the windup toy soldier and maybe even smashes him to pieces (Serling is, after all, a robot capable of may things, INCLUDING being "Turtle X").

"SERLING (V.O.)
They'll destroy me if I don't do something. But what? Blast them to atoms? And risk altering the future? I can't."

Can Serling "blast them to atoms"? I mean, does he have a hidden atom blaster we've never seen before?

"*LEO TOT
C'mon, Raph, give him back -- I wanna play with him! Gonna have a tea party and everything!"

If this were the teenage versions, I would say "Leo doesn't say "goin'"." But because these are the Turtle Tots, I'll let this one (and a few others in this script) slip by.

Serling tries to raise his arms - they hover - and collapse.

This must be a mistake, as I doubt "A shadow falls over Serling" is meant to be part of Wendell's dialogue.

"OLD WENDELL
Quite frankly, I've been waiting to get my hands on you -- all my life!

WIDE ON ROOM TO REVEAL: an elaborate toy making workshop, with conveyor belts, power tools, and raw materials of plastic, steel, nuts and bolts. All meant for the manufacturing of one thing: Serling!

A multitude of monitors display images and schematics of Serling, as if one were attempting to make a Serling of their own. And all about, we see the results of that effort: SERLING-ESQUE TOYS! Lots and lots of mutated versions Serling, in various shapes and sizes, and in various states of completion but all recognizably him.

ON WENDELL as he activates a terrifying hydraulic POWER DRILL suspended over the metal table. Its blade SPINS!

OLD WENDELL
Now, let's see if we can figure out what makes you tick..."

I'm still not loving this bit, but at the very least we need to make it clear that Wendell has spent many years trying to figure out what Serling was and how he worked (and failed), and now that he finally has Serling in his possession, he now has the "real deal" from which he can extract the information he needs to reproduce Serling...

... or does he? It might be interesting, albeit maybe not necessary for the sake of this story, to show that once Wendell actually starts to examine Serling closely, he realizes that the technology that Serling contains is WAY beyond his capacity (after all, Serling was made 100 years in the future).

"CRANE TO A DOWN SHOT ON MIKEY ON THE FLOOR PIANO: Mikey hops from key to key -- playing the classic five note opening theme to "2001: a space odyssey!" And suddenly, the FLOOR beneath the piano swings open - revealing a SECRET STAIRCASE! Mikey tumbles down the stairs! "

This is still, for several reasons, as silly as it was in the outline. I really don't see the point of it.

"*ON MIKEY: pinned to the floor by tons of tiny Bots, crawling up his legs, arms, chest. Cable wire extends from their finger tips; they're tying Mikey down like Lilliputians in Gulliver's Travels."

WTF?!!! This is ridiculous.

"Suddenly: draw near. The ground SHAKES jostling the Tots as...

WENDELL - inside a SUPER SERLING-ESQUE TOY BOT BATTLE SUIT - slowly emerges from the STAIRWELL to his secret lair.
CUT TO THE TOTS - they CUT TO SERLING (at the water gun) - he

*DRAMATIC ANGLE ON WENDELL IN BATTLE SUIT - his exposed head sticks out from a domed chest plate. His left arm capped with a tremendous cork gun; his right with a humongous boxing glove. And on the soles of his feet, coiled, bouncy springs. He toward the TOTS – CORK RAISED - and FIRES:"

From this point on, this story just gets worse and worse, going from inanity to inanity. Very disappointing. I like the attempt at a lesson about obsession and possessiveness at the end, but this stuff with the "SUPER SERLING-ESQUE TOY BOT BATTLE SUIT" and the "giant cork gun" (??!!!??!!) is really painful to read.
Also, it is STILL extremely preposterous that none of the Turtles would remember the look of Serling from when they met him as Turtle Tots, but Splinter would. It makes little to no sense. I think this is a classic example of "writing oneself into a corner".

Just one more thought about this episode: I think with the steup of the toy guy and his secret toy lab and his desire to make great toys, we missing an opportunity to have some somewhat self-referential fun, in this vein: After the fighting with the toy robots is over, and Wendell gives up his obsession with Serling and his plan to make lots of Serling toy duplicates, perhaps one of the Turtles (I'm thinking Mikey) starts feeling bad for Wendell and suggests "Hey -- maybe you could make toys based on US!"... to which Wendell will reply with some of the things that people actually said when Mark Freedman was first trying to sell the TMNT to various companies ("Green doesn't sell!" and so on).